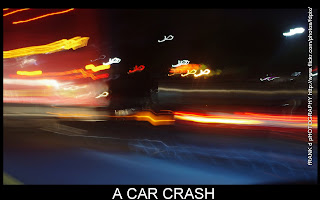 U2 has a song, Daddy's Gonna Pay for your Crashed Car, on their Zooropa album. One of my favorite songs with such a pounding drum beat. When I'd gotten back to town from my Ft. Lauderdale voyage i was caught by surprise by a tiny Yorkie running in the middle of a busy highway. As i slammed my breaks to avoid hitting it, as did every other car on the high way, my attention was quickly taken by the sight of a car crash. Across the road two SUV's had smashed into each other.

My first instinct was to watch and stare. Putting everything that happens in life to an image is new to me even with all my years in photography, capturing life as it happens, real life anyway, will take some getting use to.

As the traffic started to move again, a lady had rescued the Yorkie by the way, I grabbed the camera with very little time to tamper with the setting and shot from the hip. This is what i got as the cars streaked by and the camera's slow shutter. It would have been interesting to see the exact image as it happened but this really adds to the effect of a car crash.